The catching-up of the new EU member states countries with their counterparts to the West continues, with the change of scores and ranking positions from 2011 to 2017 showing that as a group they are those registering biggest improvements over the years.

The report “Try Harder: Findings of the European Catch-Up Index 2017” is based on the seventh edition of the Index (www.TheCatchUpIndex.eu), which measures and ranks the performance of 35 countries – the EU member states, the candidate and potential candidate countries across four categories: Economy, Quality of Life, Democracy and Governance, using 47 indicators, with scores from 100-0 (highest to lowest) and rankings from 1-35 (highest to lowest).

The best performers in Index 2017 are concentrated in Northwestern Europe with Denmark (1st place out of 35), Sweden (2nd), Luxemburg (3rd), the Netherlands (4th) and Finland (5th) at top of the ranking while the underperformers are grouped in the Southeast Europe with BiH (35th place out of 35), Turkey (34th), Macedonia (33th), Albania (32nd), Serbia (31st).

In regard to the fallout of the debt crisis in Europe, the collapse of previously crisis-hit countries such as Cyprus, Greece and Spain has stopped and at the same time Ireland has made significant progress in the rankings (8th place in 2017).

In general, the catching-up in the Economy remains the most successful category and Quality of Life is the worst category for the group, which includes indicators for welfare of consumers and public services such as education and healthcare. This could be interpreted as failure to translate economic advancement into better standards of living.

A new trend is emerging as several EU10+1 countries – e.g. the Visegrad 4 – are converging with the older member states in the Economy category, but diverging in the Democracy category when their long-term Index results are compared. This may signal a new East-West divide returning to Europe, in contrast in previous findings of the Index where the North-South divides were more pronounced. It is too early to say, but this may be also a departure from the catching-up paradigm as now economic development and democracy seem to be decoupling.

The Balkan countries – as the candidate countries as well as their close EU neighbors such as Bulgaria, Romania, Croatia and Greece – remain a cause for concern as they are lagging behind in nearly all four categories – Economy, Democracy, Quality of Life and Governance. Full text of the report Try harder. Findings of the European Catch-Up Index 2017

The Catch-Up Index is a project of the European Policy Initiative (EuPI) of the Open Society Institute – Sofia.

New edition of The Catch-Up Index 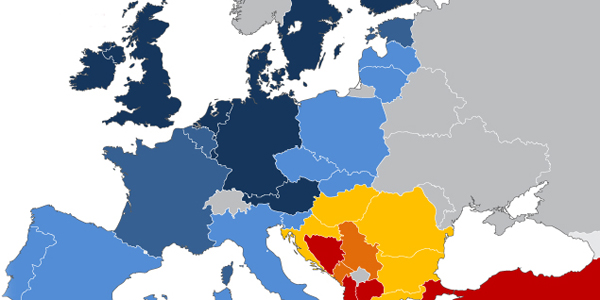