“I believe that the strong civil sector is the one that offers solutions and ways of change for a better society.” These were the words of Malina Krumova, Deputy Prime Minister for EU Funds in the Caretaker Government, to the participants in the closing conference of the NGO Programme in Bulgaria under the Financial Mechanism of the European Economic Area. The Deputy Prime Minister said that the civil society has the responsibility to be a corrective to any government. She emphasized that the NGO Programme in Bulgaria has achieved its main objectives: to help reduce the socioeconomic disparities and develop the bilateral relations with the donor countries (Iceland, Lichtenstein, Norway).

“You are the true ambassadors of change. You are the real heroes of that change.” Christian Grotnes Halvorsen, Senior adviser at the Norwegian Ministry of Foreign Affairs, addressed these words to the representatives of the non-governmental organizations, attending the conference. He stressed that it was not possible to build a living society without the key role of the civil sector. Тove Bruvik Westberg, Ambassador of Norway to Romania, Bulgaria and Moldova, sent a video message to the participants in the conference.

The results from a representative survey of the attitudes towards democracy, the rule of law and the fundamental human rights were presented at the forum. “The majority of the Bulgarian citizens are convinced that their fundamental political and civil rights are protected and they may freely exercise them within the existing democratic structure of the country. But they are dissatisfied with the way the democratic institutions function and the way the laws are written and enforced”, said Ivanka Ivanova, Director of Law Programme, Open Society Institute – Sofia, who presented the data. At the same time, Ivanova emphasized, huge groups of the population remain isolated from the social life; they neither participate in the decision-making processes, nor feel presented in the bodies of the local and central authorities. Evidence for this are the data according to which 80% of the Bulgarian citizens do not participate in any organized form of public life – whether a party, trade union, community center or NGO. The data about the law enforcement in Bulgaria are even more alarming: 78% of the citizens do not believe that the laws in the country apply equally to all, and only 37% believe that courts are able to prevent the government from breaking the law.” The full text of the report “Democracy and civic participation. Public attitudes towards democracy, the rule of law and fundamental rights in Bulgaria” is available here.

“Non-governmental organizations are much more sensitive to the issues of democratic rights and freedoms than the society in general”, said Boyan Zahariev, Director of Public Policies Programme, Open Society Institute – Sofia. Presenting data about the state of the civil sector, he emphasized that while nearly 52% of the citizens of the country agree some of the democratic rights and freedoms to be limited for a while, in order to establish order and security, the representatives of the NGOs that give a positive answer to this question are less than 19%. The data show that the Bulgarian non-governmental sector and the civil society in general are facing serious challenges, said Georgi Stoychev, Executive director, Open Society Institute – Sofia. He added that the need of solidarity with the civil sector in the next years will increase.

Full text of the report Democracy and civic participation. Public attitudes towards democracy, rule of law and the fundamental human rights in 2016

During the last programme period within the NGO Programme, 454 projects were funded, which involved 618 organizations that worked in partnership with NGOs, including government institutions and municipalities, schools, universities and business organizations. The data are presented by Elitsa Markova and Anita Baykusheva from the NGO Programme. They drew attention to the enormous diversity of topics that the NGOs have covered in the implementation of their projects, as well as to the serious and measurable effect of these activities. 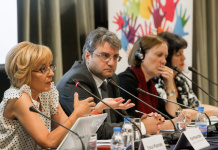