Twelve years after the accession of eight countries of Central and Eastern Europe to the EU, followed by three more states in 2007 and 2013, the process of convergence with the older member states remains the main task and challenge. Estonia, the Czech Republic and Slovenia are the most successful countries in the ranking of the new Catch Up Index, occupying the 13th, 14th and 16th place among 35 European countries. Croatia, Romania and Bulgaria remain the last of the eleven newest old EU member states, taking the 26th, 28th and 29th place in the general ranking.

The index measures and ranks the performance of 35 countries in Europe – member states and candidates, by 47 indicators divided into four categories – Economy, Democracy, Quality of Life and Governance. It is devised and maintained by Open Society Institute – Sofia and is accessible at www.TheCatchUpIndex.eu. Since 2011 the index has had five issues, which allows the detection of trends and models in the processes of development of different countries, groups of countries or certain categories.

The main conclusion we may draw from the new issue of the index is that convergence is a working process which gives results and brings the newer member states closer to the others in the EU. This is evidenced by the fact that the group of the Central and Eastern European countries is the only one that has been progressing in the five-year monitoring period. However, the catch-up process is not regular and clearly shows that some countries are making better, others – more limited, use of their EU membership. According to the index results the country with the biggest progress this year is Estonia, which has moved five places up since 2011 – from the 18th to the 13th of a total of 35. Bulgaria remains the last of the CEE countries. By comparison, Romania marks an improvement which may be the grounds for a future successful catch-up, and Hungary deteriorates in three of the four index categories and steps back from its initial good position.

The catching-up in the Economy category is most successful for the CEE countries, and the most problematic convergence is in Quality of Life, which is registered by indicators referring to education, healthcare and social problems.

In the overall ranking Bulgaria occupies the 29th place of 35, preserving its position of 2014, but is one place down in comparison to 2011 and 2013. The country’s best results are in the Economy category, where it occupies the 28th position, followed by Democracy and Governance, 29th in both cases. The country’s poorest performance is in the Quality of Life category, where it takes 30th place.

In terms of the different indicators, Bulgaria is performing most successfully with regard to the level of government debt, going one position down, but remains third of 35 countries. There is some improvement in comparison with the results of previous years in energy efficiency, roads, information society, and market economy. This issue registers also better performance in terms of the quality of life indicators, such as poverty risk, but the inequality rises. Of the democracy and governance indicators the freedom of the media deteriorates, whereas the crime and conflict indicators mark an improvement.

With regard to the European processes the index registers the impact of the insufficient convergence between the countries and outlines the possible groups in Multi-speed Europe. The most developed groups include countries of the northern and northwestern parts of the continent, and the groups lagging behind are in the southeastern part of Europe. This is a prerequisite for an even greater North/South divide which replaces the previous gap between Eastern and Western Europe.

The website of the Catch Up Index is at www.thecatchupindex.eu, where users may find rankings by countries and indicators and create their own index using the data available. The index is a product of the European Policies Initiative (EuPI) of Open Society Institute – Sofia.

The complete text of the report Don’t panic! Findings of the European Catch Up Index 2015. 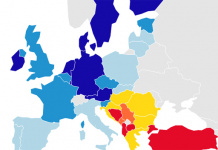 Don’t Panic! Findings of the European Catch Up Index 2015